THE ART OF COMFORTING

The Art of Comforting

“Must reading for everyone…The message is instantly applicable as well as enormously comforting.”

“…filled with clear examples and actionable steps that help readers effectively comfort those in need. Her voice is comforting, and some sections read like a memoir; her candid revelation of her own struggles reaffirms for the reader that a comforter does not always have to be strong.”

“With clarity, compassion and wisdom, Walker teaches the art and the craft of comforting others and ourselves. In today’s distressed and frenetic world, she does us all a great favor. She teaches us what we most need to know. This fine book is a resource for all those who want to be able to help friends, family members and other people who are in need of our kindness.”

—Mary Pipher, Ph.D., New York Times bestselling author of Reviving Ophelia, The Shelter of Each Other, and Women Rowing North

“In an effort to write the book she couldn’t herself find, rehabilitation counselor Walker discusses the nature of comforting and illustrates how to restore this most important skill… Her message comes not only from experience, but from others in the grief/trauma counseling field, in this guidebook that rings true and pulls the reader in for more. Recommended for all interested adults.”

We live in an increasingly “virtual” world in which it can be tempting to skip making a true, human connection with someone in pain. Even though our thoughts are with them, we lack the confidence to reach out, worrying that we will say or do the “wrong” thing.

In this practical, step-by-step guide to what she calls “the art of comforting,” Val Walker draws on numerous interviews with “Master Comforters” to guide readers in gently and gracefully supporting those who are suffering. Interviewees include inspiring individuals such as Alicia Rasin, who, as a victim’s advocate for the city of Richmond, Virginia, has devoted her life to comforting grieving families devastated by homicide, gang violence and other traumatic experiences; or Patricia Ellen, who, as an outreach director at the Center for Grieving Children in Portland, Maine, appears on site to support and comfort children, staff and parents when a school is facing a death, violence or other crises.

All of us will, at one time or the other, be called upon to offer warmth and support to another human being in distress—this book will show you how to answer the call with an open heart.

From the Sacramento Book Review:

“This reviewer did not know what to say recently when a new friend described losing his son to a drug overdose. The Art of Comforting is a book for exactly those situations when a friend or family member is in distress and we long to offer more that trite encouragement. Walker does an excellent job demonstrating common mistakes in the words we use and the actions we take in our faltering attempts at comforting those dealing with a deadly disease or the raw emotion of bereavement. We learn that it’s not helpful to compare one person’s suffering to another’s. Walker uses illuminating tables that list unhelpful platitudes next to phrases that demonstrate better sensitivity. Readers are reminded to put the relationship first, even in our hectic, impatient world. Comforters must get themselves out of the way to help others. It’s often best just to listen and follow what the distressed have to say. A touching instructional for all who aspire to comfort the afflicted.”
–-Grady Jones, Sacramento Book Review 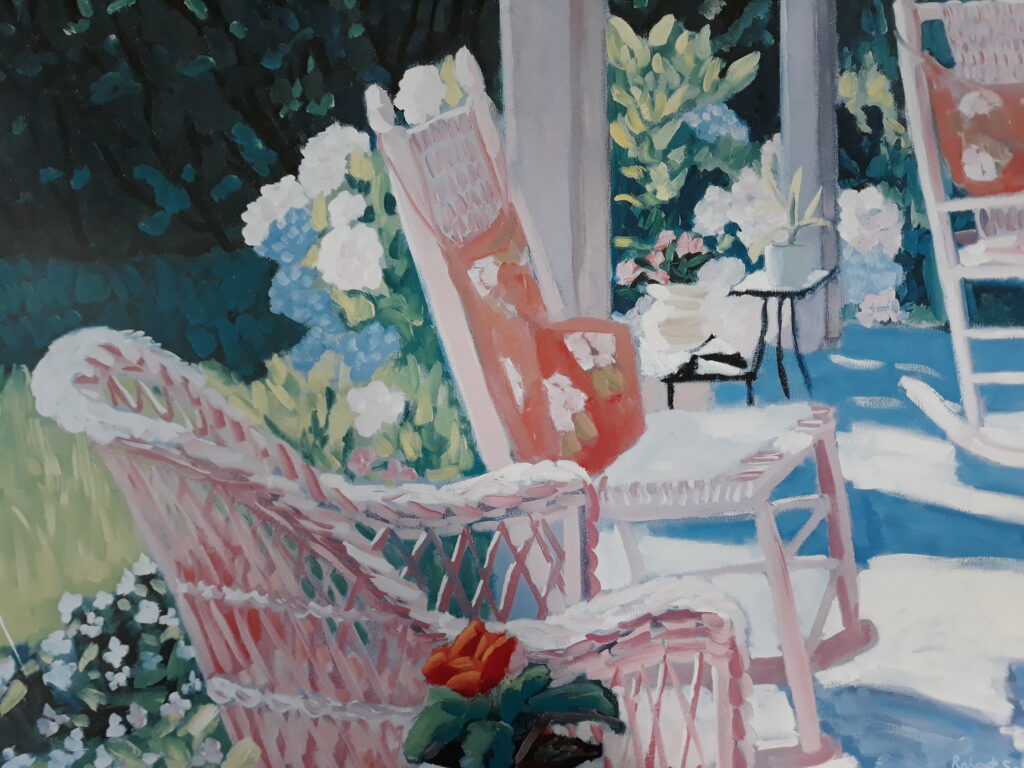 Painting with permission from Robert Selkowitz

Press for Art of Comforting

Media Appearances for Art of Comforting

Coping with Cancer Magazine, The Language of Comforting: What to Say (and What Not to Say) to Someone Facing Cancer. (March/April 2014 and March/April 2016)

TIME.com, Maia Szalavitz interviews Val about the art of comforting, noting how today’s college students may be 40% less empathetic than their predecessors thirty years ago. Mind Reading: The Art of Comforting. (January, 2011)

Good Housekeeping, Help a Friend Deal with Infidelity. Ginny Graves asks Val to weigh in on how to comfort to a loved one or friend who feels betrayed. (October,2012)

Chicago Tribune, How to Offer Comfort Cheryl Stritzel McCarthy’s Q&A with Val. Reaching out can be one of the hardest things to do. Here are some tips from the author of The Art of Comforting. (March, 2011)

Marie Claire Magazine/blog, How Do You Help a Friend Who’s Grieving? by Maura Kelly (Followed by Do’s and Don’ts for Comforting a Friend Post-Breakup, and 4 Myths about Comforting Friends)

Wall Street Journal, Elizabeth Bernstein asks Val for advice about how to offer support to grieving people in her article, When a Friend Grieves, How to Get Sympathy Right (January, 2011)

USA Weekend Magazine, LiveSmart, Be There, Be All There for Them, an excerpt from The Art of Comforting, (January, 2011)

Good Housekeeping Magazine, How to Help a Friend, an excerpt from The Art of Comforting, offering do’s and don’ts for reaching out. (December, 2010)

Maclean’s Magazine, What Grieving People Need from You-Promising to “be there” doesn’t mean dropping off a casserole, then vanishing. Article about The Art of Comforting by Julia McKinnell (November, 2010)

Whole Living Magazine, How to Comfort Someone in Crisis, an excerpt from The Art of Comforting, (October, 2010)

Reviews for Art of Comforting

Radio Interviews for Art of Comforting

Your Money and Your Life with Hosts Amy Wood and Jane Honeck, Boston, Sept. 2012